N-Dubz’s latest concert at the O2 last night was hit by yet more chaos as a fight broke out mid-performance after one girl headbutted another right in front of the stage.

Video on social media showed several women arguing loudly at the N-Dubz gig in London before one headbutted another, leading to a brawl which saw some fans forcibly removed by security.

It came just 24 hours after the hip hop trio were slammed by fans for canceling a concert five minutes after they were due to appear on stage in Nottingham.

Fans of N-Dubz at the front of the O2’s standing area were filmed arguing during the show, as one woman with bright pink hair remonstrated with a group of other young female fans.

The woman accused one of the group of fans of insulting her, which the group strongly denied was the case.

The girl targeted by the pink-haired woman could be heard shouting over the music: ‘No I never! You can f*****g go off mate, I never said that.’ 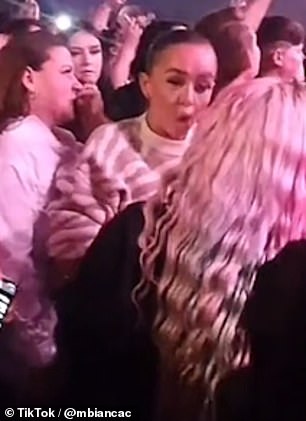 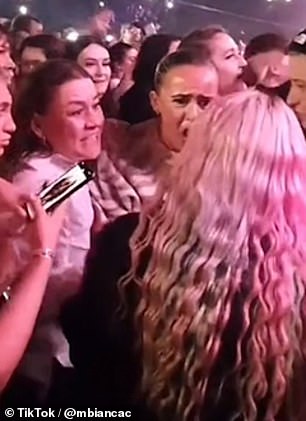 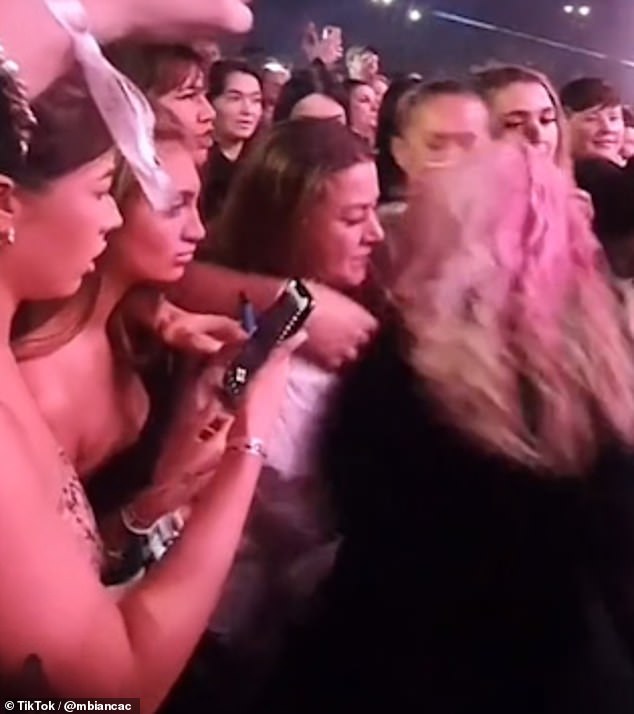 The pink-haired fan headbutts a young woman watching the concert (pictured with brown hair, tied back) 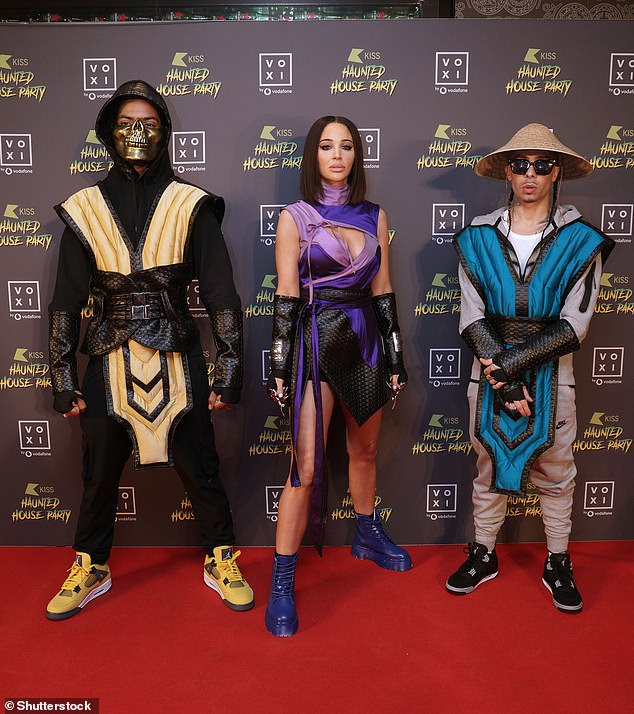 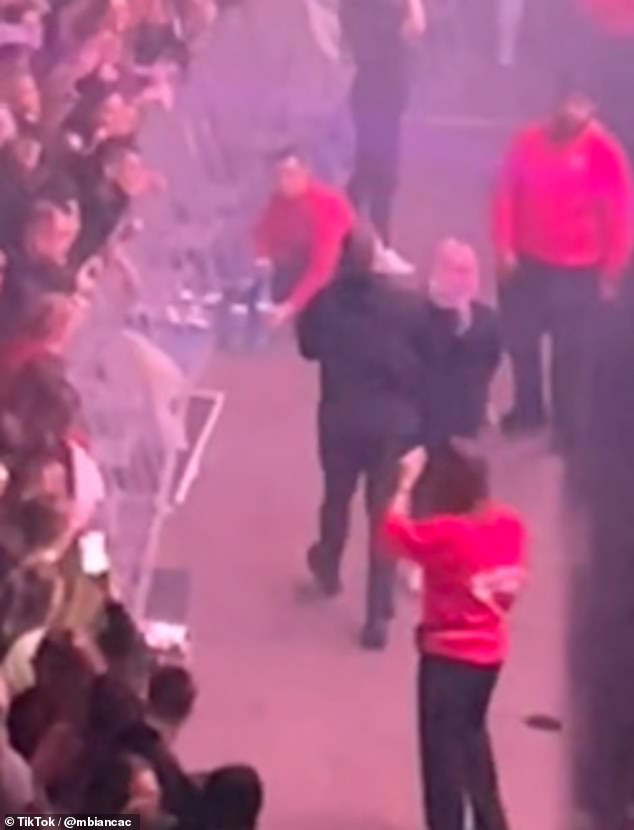 The pink-haired woman is escorted out of the arena by security staff, following three other fans one of whom was injured by her headbutt 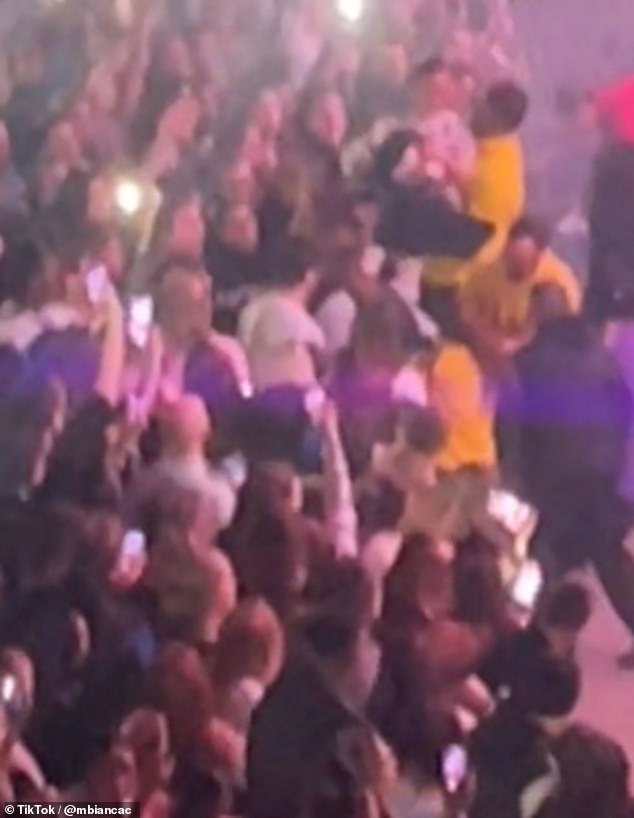 The pink-haired woman responded by violently headbutting the other fan, reportedly causing her nose to ‘pour with blood’, before dropping to the ground and allowing her companions to take over in the ensuing fight.

The injured fan had to be carried out of the arena by security and was seen sobbing as she left.

The headbutter’s companions appeared to be pushing and shoving the other group of fans, as other members of the audience attempted to defuse the situation.

One of the women shoving the group had to be physically restrained by another before security guards were able to extract them.

Security removed four fans in total by picking them up and pulling them over the barrier as three of them continued to resist and lash out at those around them.

It is understood the other group of female fans, who were being shoved, were left to enjoy the rest of the show.

Comments on social media claimed the group who were removed had been threatening to ‘knock other people out for touching them’ and security had been informed.

One described the incident as a ‘kamikaze headbutt’.

The N-Dubz reunion tour has seen previous controversy this week after the group canceled a gig in Nottingham after member Dappy fell ill.

Fans were left fuming after the concert was only canceled five minutes after the band were due on stage, and after they had already seen warm-up acts perform.

After waiting for hours inside the Motorpoint Arena, they were enraged to learn the band would not be taking to the stage for the show on their comeback tour, with an on-screen statement blaming it on ‘an artist’s illness’.

On Wednesday, Dappy took to Instagram to share videos of himself with his croaky voice as he insisted their London show would go ahead as planned.

The rapper, 35, first shared a video of himself wearing a sign which read ‘I can’t talk, I’m on vocal rest’ as he briefly spoke with his barely-there voice to apologise to fans.

He said: ‘Yo my people. Management told me I’m not supposed to be talking right now, but I’m talking just to get this message across to you lot.

‘We announced that we’re not coming out to do the show in Nottingham and we are terribly, terribly sorry. All your tickets are still valid and we will see you on the rescheduled show on December 7.

Dappy then shared a clip of himself arriving at the O2 Arena as he insisted that the show would be going ahead whether he had a voice or not.

Panning across the exterior of the O2, he said: ‘Guess who made it? I’m here boy, night two at the O2. This is officially the third time we’ve sold out. Voice or no voice I’m here!’

He also shared a video of excited fans cheering in the sold-out crowds as he prepared to take to the stage for N-Dubz’s latest performance.

But the fight immediately in front of the stage area tarnished the group’s return to the stage.